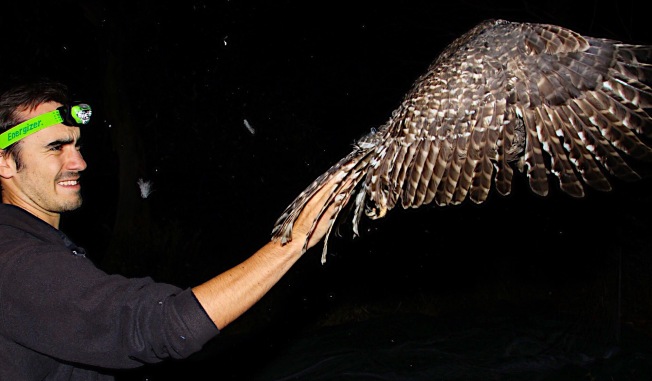 Apex predators are critical to ecological function, however their life history traits are often not conducive to survival in urban environments. While this can result in the loss of some apex predators, others are able to inhabit and utilize urban environments. Understanding predator resource requirements and the factors driving their distribution is often difficult due to their cryptic nature, however, this understanding is essential, given the current rate of urban expansion.

In this research we use a threatened apex predator, the powerful owl (Ninox strenua) as a case study. Specifically, we aim to (1) develop a Species Distribution Model (SDM) to ascertain environmental variables driving habitat suitability across an urban gradient (2) determine fine scale spatial movements of powerful owls using GPS telemetry; (3) validate the SDM against collected GPS movement data; and (4) evaluate habitat predicted by the SDM against current reserve systems to establish whether they are adequate for the future protection of this species.

We used MaxEnt and citizen science data to produce SDMs that predicted habitat suitability for powerful owls and identified the environmental variables driving habitat across the landscape. Fine-scale spatial movements for urban powerful owls, gained via GPS telemetry, were used to establish home-range sizes, validate models and assess the fit of telemetry data against SDM predictions. Rivers, vegetation (particularly dense tree cover) and distance to riparian areas were the ecological variables driving predicted habitat for powerful owls across the urban gradient. There was a strong relationship between habitat predicted by the SDM and the fine scale movements of powerful owls in urbanized environments. Home-ranges within this urban study were notably smaller than previous estimates established for forested environments.

The powerful owls in our study were also shown to utilize considerable amounts of habitat outside of the reserve system. This has severe conservation implications because it is often the space outside of reserves that are at most risk from urban intensification. Conservation of the powerful owl in urban environments, therefore, needs to focus on both habitat management within existing reserves, and on establishing clear vegetation management strategies in the surrounding urban matrix.