The title comes from the song “Big Yellow Taxi” first sung by Joni Mitchell in 1970, and variously recorded by many others since. The song has a strong environmental message and amongst other things effectively was a comment on urbanization (albeit originally written about Hawaii). Ok, this song was written 45 years ago, what does it mean now? The reality is, as human populations continue to grow, urbanized areas are expanding at a rapid rate and becoming a dominant land-use in many areas.

Does it matter? Certainly, biodiversity is impacted by intensification of urbanization as native vegetation is removed and replaced with houses, roads and paths (generally referred to as impervious surfaces). Much of the remaining area is converted to managed grass (lawns) and gardens often dominated by plant species exotic to the area. Many native species demonstrate strong negative responses to impervious surfaces and lawns.  Effectively these new ‘habitats’ do not provide the resources many native species need, and as such we see significant contractions in the number of species found in cities.

How bad is the situation? I provide the following image of Melbourne (Melbourne is towards the centre of the left hand side). The image is generated from satellites and then classified based on spectral reflectance. Ultimately, we can simplify the city down to impervious surfaces, grass (both lawns and agriculture), tree cover and a couple of categories of water.  Using this approach it becomes clear that the city centre and much of the suburban area of Melbourne are now dominated by impervious surfaces and lawns with most of the tree cover removed. More worryingly, Melbourne is expanding and more areas are being converted to urban areas. Cities all around the World exhibit similar characteristics, and are having significant detrimental impacts on biodiversity. Interestingly, there is also strong evidence that the reduced interaction of people with nature that occurs in modern cities is impacting negatively on peoples mental and physical health. 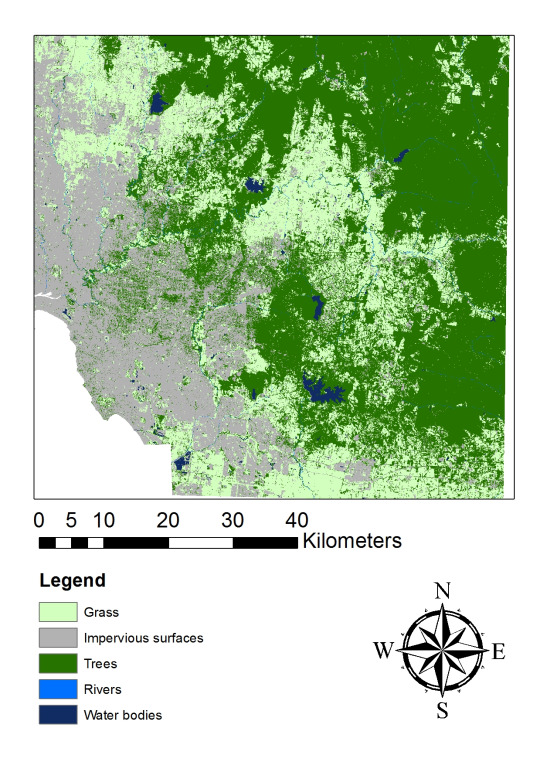 One of the biggest challenges of the future is going to be around how we make our urban areas less hostile to nature. This is going to require governments, planners and other groups of great vision to re-imagine how cities are designed and how they cater for more people. Continually expanding our cities can not be a sustainable strategy, yet on face value it may be the easiest political solution.  It will be interesting to observe if things change. Maybe in 45 years we will have a song that refers to “ripping up the car park and putting in an urban woodland”. Then again, maybe I am just dreaming 🙂