We often talk about the need for long-term continuous research in ecological systems. Long-term research allows us to see patterns we may not necessarily see through space for time substitution studies or snap shot studies, but how do long-term studies start? Bearing in mind that studies do not become long-term until they have actually been running for a reasonable length of time, do they start out planning to be long-term?

I am not sure about others, but our research in the Grampians ecosystem in western Victoria, Australia, did not start out with a long-term view point. Actually our research commenced in 2008 with a view to try and work out what species of small mammals had recolonized a massive area that had been burnt in 2006. The fire in 2006, was one of those large, high intensity wildfires that were being called ‘Mega-fires’ at the time. There was very little known about recovery after this type of fire so we thought it was a good opportunity to see what was happening two years after the event.

We established 36 sites throughout the Grampians, and over a 3 month field season the team trapped everything they could. This was a major exercise, almost 10,000 trap nights, lots of lovely prickly vegetation, and lots of mice! The interesting thing at this point was that there were not many native small mammals in the system at all.  Fair enough I hear you say, the system was burnt two years prior. But, a number of our sites had not been burnt in decades and were supposed to act as reference points for our burnt sites. Upshot, for some reason the whole system seemed devoid of native small mammals. 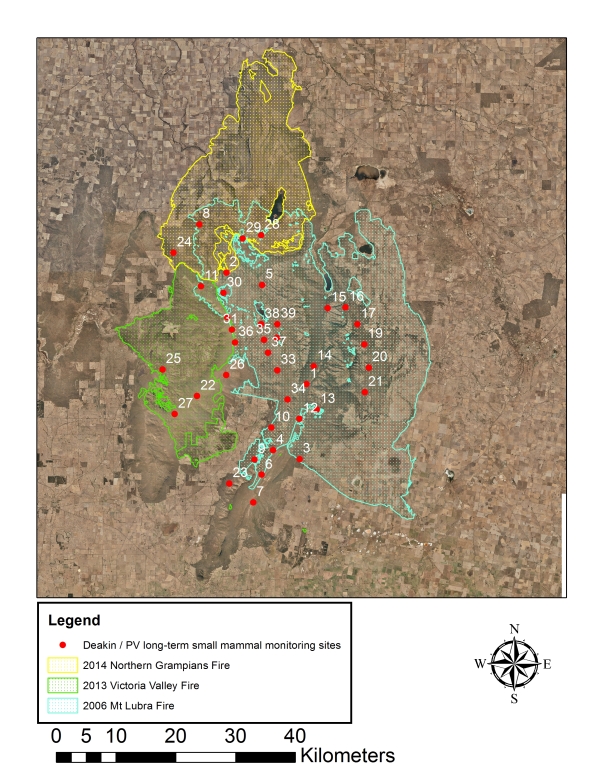 So sitting back at the end of 2008, we discussed whether we should conduct another year of monitoring.  We were really worried about what was going on, and really keen to see when things came back into the burn area.  All of a sudden here we are in 2016 with 8 years of data from this amazing region.  I have always had in my mind it will not be long-term until we have 10 years under our belt, but the reality is this is now one of the longer ecological monitoring projects in Victoria.

So what have we discovered (for want of a better word)?  Well, we now know we have been incredible lucky.  We have had a very strange cycle of rainfall, ranging from massively below average rainfall runs through to a major flood event in the summer of 2010-2011.  These rainfall conditions not only mimic what has been predicted to occur under future climate change conditions, they have demonstrated the power of water in temperate ecosystems.  Prior to this project I had always thought of small mammal species as being relatively stable through time, being reset by fire, but coming back.  I did not really think of their numbers booming and busting as we have seen from long-term research in arid systems.  What we have seen is an almost classic boom-bust response of mammals in the Grampians based on rainfall.  So, temperate systems like the Grampians are not resistant to shifts in rainfall. This could be a significant issue under future climate change conditions. 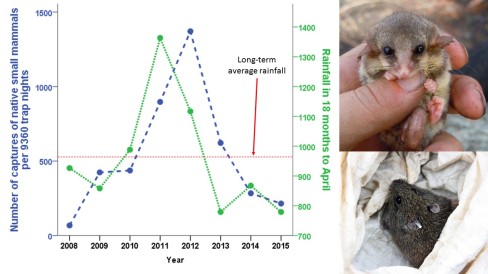 In part due to the floods, we got 2 more major fires in 2013 and 2014.  The rain makes every thing grow, and the system declines when the rains drop away, leaving the system ready to burn. Interestingly, another prediction from climate change models is that systems will suffer more, larger fires as a consequence of underlying rainfall patterns.  I am sure you can start to see how lucky we have been in such a short period of time, hyper-variable annual rainfall conditions and multiple high intensity wildfires. Off this main project, we have also looked at what survives immediately after wildfires, and we are currently trying to use satellite imagery to predict where climate refuges exist in the landscape for small mammals during droughts.  All of this from a one year snap shot study.

I have learned a few lessons along the way.

If you want to follow the adventure, we have a twitter feed for the project at https://twitter.com/Wild_Gramps